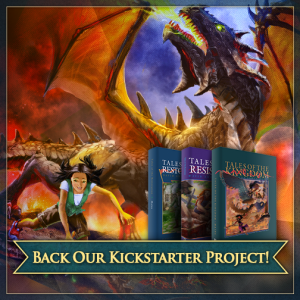 One never knows where a sermon series might go on its way out into the world—particularly when the preacher is married to a writer. Some 40 years ago, in a Teamsters Union Hall on the west side of Chicago, I preached a series to a young idealistic congregation eager to do God’s work in the world. That series was titled “The Christian, the Church and Society.” It has been the one sermon series, above any other in my five decades of ministry, that has received the most comments regarding its impact.

So much so that my wife, Karen, a young and idealistic pastor’s wife, took the main concepts and built three award-winning story books out of that preaching effort. It is now 30 years since the first book, The Tales of the Kingdom, was written. Within the next decade, two more books followed, completing the Kingdom Tales Trilogy—Tales of the Resistance and Tales of the Restoration.

The basic thrust of the series was: The Kingdom of God is any setting where Christ is recognized as King, His will is obeyed and obedient subjects reap the benefit of His rule. Quite a key Biblical truth to integrate into three award-winning illustrated storybooks. But then that’s the proof of an agile and creative writer; it’s someone who can take spiritual meat and transform it into classic children’s literature (think John Bunyan with Pilgrim’s Progress or C. S. Lewis and the Narnia series).

My word to the wise is this: Be careful what you preach (particularly if a spouse is listening). You never know what someone else will do with your words.

This week we are launching a Kickstarter campaign (this is a crowd-funding Web site), to redesign, re-illustrate and republish the three Kingdom Tales books for a new generation.

In a rapidly globalizing world, we as a nation are realizing that the world is a complex and shining (and often difficult) conglomerate of multi-cultures and diverse races and ethnicities. Due to this rising global sensitivity, we feel strongly that it is time to re-release the three books, but representing the above verities in the illustrations.

Will you check out the Kickstarter campaign and see if there are ways you would like to become a backer? The link is www.kingdomtales.com/kickstarter.

I am enough of an artist that I love working with other artists.  I can remember the first time I was invited to attend a two-week laboratory where one of my books was being turned into a film project.  The screenwriter was a friend who had talked me into letting her submit this entry, and I rather reluctantly made my way to New Harmony, Indiana where I realized for the first time in my life I was with a whole group of people and we were all speaking the same language (artist-ese).

So some thirty years ago, when Jack Stockman, the artist who illustrated the first two books of the Kingdom Tales trilogy, began scheming and dreaming with me of collaborating on his first fully illustrated book project and my first venture into creative writing, it was pure joy to see how Jack’s mind interpreted my stories.  I loved his work and still love it.

Jack’s process, however, is not cost-effective for a tight publishing budget.  It takes Jack a week of work to paint one illustration.  His work is detailed, imaginative and leans back into the classic children’s illustrated books of another generation.  The artists who submitted illustrations for the contest we ran through the 99Designs Web site are using computer technology.  Consequently, the winning artist (from Bulgaria) Zhivko Zhelev, can turn out two to three illustrations per week.

However, David and I (and countless other readers) love the Stockman illustrations.  (The publishers hired another artist to do the third book, Tales of the Restoration—one of the headaches of being an author is being subject to the whims and fancies of the publishing industry.) If the Kickstarter Campaign exceeds expectations—and many do (many also don’t even reach their goals)—there will be enough money to pay Jack to complete the third book with his gorgeous artwork.  This then, will give us the “classic-illustrated set” in addition to the newly-illustrated set with more of a multi-ethnic representation in the art.

Check out this link https://www.kickstarter.com/projects/kingdomtalestrilogy/the-kingdom-tales-3-illustrated-storybooks-that-ki to see how we are doing in reaching our goal.  Check out the Backer levels to see if there is anything you would like to pre-order for your own family or to give as gifts.  Pledge an amount if you are led to do so.  Then, would you tell your friends about this campaign?  We need lots of buzz, not only to reach the goal but to exceed it so that we can get Jack Stockman started on finishing a long-unfinished project.  Thanks so much.